On Saturday, May 15, 2021, under a crystal blue sky, University of Bridgeport graduates inaugurated the new Hartford HealthCare Amphitheater and began their own journeys toward success.

Lining up under strings of lights, wearing colorful masks and decorated mortarboards, the eager students celebrated not only their own graduations and the first event at the Hartford HealthCare Amphitheater, but also the hopeful end of the pandemic.

With pomp and circumstance, graduates marched into the brand-new arena, filling socially distanced rows of seats under the giant metal frame of the theater. Friends and family watched from the raised seating in the back, while faculty and administration gathered on the broad stage. Other friends and family watched over livestream, rooting for the graduates from afar.

After the national anthem was played, Father Michael Doody gave the invocation. “You have gifted these graduates so many companions and stalwart mentors,” he said. “We ask you to bless each one of us today as we celebrate these graduates.” Mayor Joseph P. Ganim was introduced and spoke to the graduates briefly about his hopes for them. “We will rely on you,” he said. “This world now belongs to you.”

This is a great day of transformation for you, and for UB itself,” he said. “Change has become a constant in our lives. We must imagine ourselves to be transformed before the moment of change, or that moment will not come.”

At the 10:00 am undergraduate ceremony, Provost Manyul Im introduced Connecticut Supreme Court Chief Justice Richard A. Robinson and awarded him the honorary degree of Doctor of Humane Letters for his many services to justice and law. “It feels a lot like that moment when the clouds have passed,” Robinson said in his speech, invoking a new day for the students and the nation. “Let us learn from our experiences on the rough seas and become skillful sailors.”

At 2:00 pm, the graduate students had their own ceremony, listening to stirring speeches from student presenter Laarni Beceril and Bridgeport Hospital president Anne Diamond. “I want to leave you with one clear message,” said Diamond, talking of the lessons she learned in the dark days of the pandemic. “Run toward the fire.” In recognition of her many services to the health and wellbeing of the region, the University of Bridgeport awarded Diamond the honorary degree of Doctor of Humane Letters.

Perhaps the event and the struggle that led to it was best summed up by undergraduate student speaker Zaire De Sousa. “In the blink of an eye we had our world flipped upside down,” he said. “We rose to the occasion.”

View photos from each ceremony 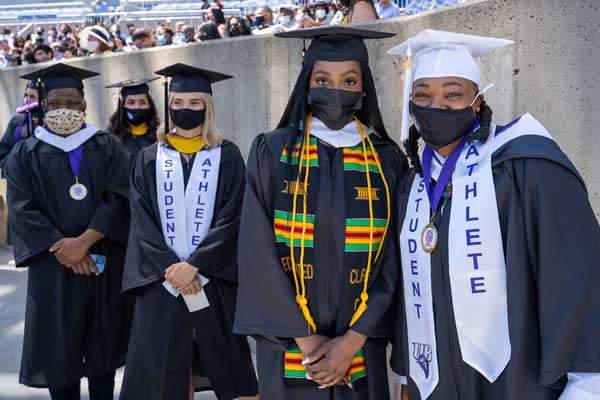 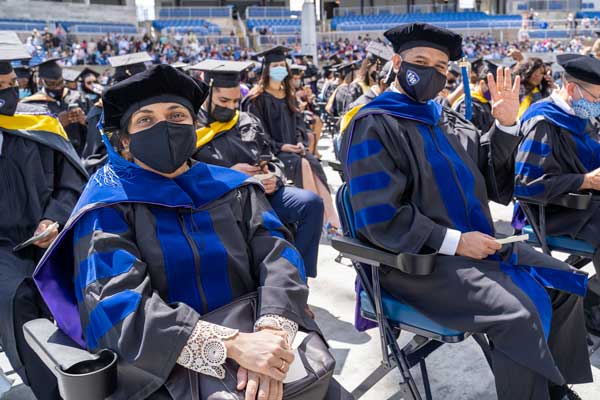 Together, let's start something great.